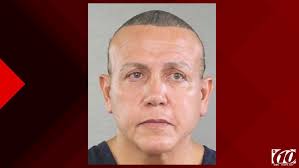 So, as we now know from current reporting, a person, or persons, had been sending packages through the mail, to various politicians and celebrities, with similar bomb devices.  An individual, we can call him a suspect, is identified as Cesar Sayoc.  That he has been identified and arrested is the good news.  That no one was physically injured as a result of any bombs detonating is also the good news.  That terroristic (select wording) threats resulted, that countless local, state and federal resources were needed to bring this to the current level of closure is part of the bad news.

Perhaps the worse news is that this level of response was necessary, that this kind of extreme conduct by this or any person is deemed necessary or an option. We are certainly at a point in time in American history when such actions can be considered acceptable.  Such a response as opposed to dialogue, study, thought and meditation…or whatever means one can to find and process their ideology.

So, what do we know, based on what we can see?

We do not factually know the motivations and intent of the suspect at this point.  These things are likely to be learned as the investigation continues.  The good news, evidenced by the quick arrest, is that there is likely a wealth of evidentiary detail to be had from the unexploded devices, the locating of the van associated with the suspect, and the living suspect taken into custody.

The combined resources of the government will begin a new level of analysis to answer a number of questions.  They might include:

A question that might also exist that asks what the state of mind of this person might be?  Is he crazy, is he rational, is he simply highly motivated, is this political or social and more?

The effect of his actions certainly has been to create an environment of fear, or put in common terms, terrorism against a body of people.  In this case being the persons targeted, but more broadly the general public.  Was this something of an initiation that works in support of a group hiding out there, watching the responses of officials and the public.

Many questions beyond this, the answers will come over time.  Do we have time?  Fear can be a strong motivating factor in the hearts and minds of people.  Can this kind of act create a movement or trend?

I certainly hope not!