I am Jane Doe 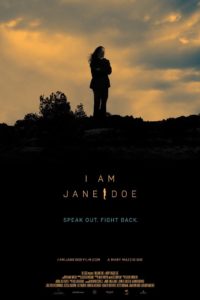 Let me start at the beginning, wow! What a telling of a difficult story.
Warning!

Be prepared to get absorbed in the story and lives of these children and their parents, to be inspired by the diligent investigators, attorney’s and activists who lived the fight against the monsters. And be prepared to cry and smile, as the story plays out. And know that the real-life story continues today.

There is another victim here. Obviously, the families of the children that are taken away from their homes and childhood. But also, the families. Families are destroyed as are the youth and innocence of these children. Societies are impacted as our children move from growing and developing into good citizens, scholars and future leaders, to injured and often damaged souls.

So, the movie. What an excellent story. You sit in your seat and get drawn it the pain, suffering and frustration of the heroes of this story. Those heroes are the mothers, and fathers, the attorney’s and investigators, and finally the political leaders that finally find the courage to take the cause up with legislation and political action.

This movie is a call to action. This is not entertainment. It is not fun. It is not something to scan and forget. The next victim, could be your own daughter or son. It could be someone from your community. Far too many think that it happens to only certain people, from certain groups or communities. Not so. I have seen the victims and the impact in my local city, Los Angeles, as I worked for LAPD over course of my career. But I have also seen it on the national stage in states and cities across America, and in countries around the world. And not just Third World, depressed or war torn countries.

The Call to Action is…join the fight. Check for your local Human Trafficking organizations, your local law enforcement agencies working the problem, and let your elected officials know your interest and concern.